Skiing the Southwest Couloir on the Middle Teton

“Cody, let it go”. I can clearly hear Sean Connery’s voice in my head as I’m looking across only one more saddle and then a 500 foot climb up the southeast ridge of Mt. Feathertop here in the Australian Alpine National Park. Why am I standing here listening in my mind to this simple, yet powerful counsel from a father to a son as he implores him to make the right decision and live to fight another day. When it comes to adventure, my plans and expectations almost always exceed reality. (This isn’t inherently negative, but it can lead to irrational decisions, frustration and disappointment). Once again, I find myself in familiar territory – biting off more than I can chew! 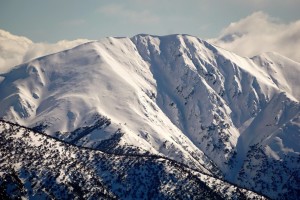 This “little” adventure had its inception about a month ago when my manager at hp urgently tried to contact me during the evening on my birthday – a Friday no less. He needed to see if I could make the trip to Australia that he was originally planning on making. We had to get my flight arrangements done that evening in order to comply with company travel policy.

Shortly after the flight arrangements were made, it occurred to me that it would be winter in Australia… WINTER = SNOW = SKIING = FUN TIMES!!! Let the scheming begin. After considerable research on the internet, which included finding a backcountry forum with many like minded souls in “The Land of OZ”, I settled on a plan and found a very gracious “local” partner, Mike G, to show me around.

My work obligations were completed on Friday afternoon after spending the week on a successful software roll-out with a fantastic hp team in Melbourne. I had packed all of my ski gear with me and had rented a car for the weekend. I proceeded to get my gear all ready and got in a 4 hour nap before my 11:55 PM wake-up call. I was up and going and headed out of Melbourne before 12:30AM – Destination, Hotham Resort / Dinner Plain.

The drive went pretty smooth, given that I had to negotiate unfamiliar territory in the dark, driving on the “wrong side of the road”. I came close to taking out one deer on a blind corner and I did catch a quick look at a couple of kangaroos at the edge of the headlights off to the side as I zipped by. At 5:30 AM I had made it to the resort area, but it still took me about an hour to find Mike’s place, get back to the Razorback parking area and get all my gear on.

Mike had warned me about the transitions, but until one has actually experienced the full length of the Razorback in early spring, you have no idea about transitions! I had my skins off and on so many times that I lost count, (and there was also plenty of boot packing/hiking thrown in the mix). At 10:30 AM, (4 hours into the trek), we were standing on top of Molly’s Hill summit, having already put in 6 miles and several hundred vertical. Now add in one other factor to the developing shenanigans: the snow conditions were still a lot firmer than we had expected. We had expected full sunlight to soften the SE aspects of Feathertop, which is where the sweet lines are. Unfortunately a high cloud cover all morning had significantly slowed the “corn making process”. It was still “bullet” snow in many places and Feathertop has some exposed terrain on many of those lines. Finally, we both had a tight schedule to stick to. Mike had family obligations and I had a 5 hour drive back to Melbourne and an early morning flight to catch. (Remember that I had been going since midnight).

If you’ve stuck with me to this point in my tale of adventure, you now can understand the significance of Sean Connery’s voice in my head. It was indeed time to “let it go”. And that is an important lesson in life. Those of us who live for adventure and a challenge need to learn when to back off – when to “let it go”. Life is truly not about how many “summits” we can conquer, but it is the journey and the adventure that is the reward. 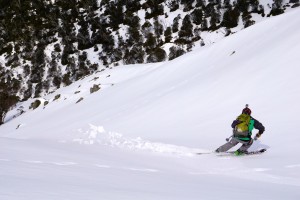 I should be fully satisfied and grateful for the experience. I was rewarded with some awesome lines on the Razorback, some great company and truly beautiful scenery. 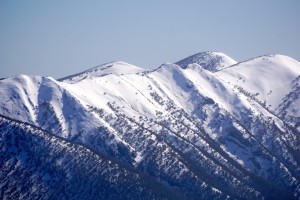 The area that we skied in. Photo courtesy Mike Garrett.

I mean how many people get to pursue and experience adventures such as this! In the end we put in 8 hours , got over 3,000 vertical and trekked over 12 miles for a full, rewarding day. For the first time in my life, I think that I am perhaps starting to understand what it means to “LET IT GO”.