The payoff for caution was that by delaying the planned climb from Saturday to Sunday due to weather conditions we gained an almost perfect day. This did not come without problems. Two of the original members of the group had pushed for the Saturday climb because of schedules and were disappointed when the decision was made to reload and make the attempt on Sunday.

As to the payoff for risk; well that also was related to the group, not the climb itself. The risk was that none of us really knew each other personally, although Tom and Deb had many mutual friends in the climbing community. I was the “outsider”. I hooked up with them through a local Idaho web Forum, Idaho Outdoors Forum. This forum is hosted by Idahosummits.com. Unlike a lot of the other “adventure” type forums that I’ve followed, this one had a different vibe. Low key, lack of pretense, absences of egos and informative dialogue is how I would describe it. Needless to say, I took a calculated risk that hooking up with some of these folks would pay off for me. (I’m not sure why they took the risk of hooking up with me). The risk paid off big time and we had a great climb! I can definitely say that I’ve made two new friends.

The team of 3 was Deb Rose, Thomas Cox and yours truly. We all were successful on our first attempt of Lost River Peak. This was 7 of 9 for Deb and 4 of 9 for Tom of the Idaho 12’ers.

The GPS data below shows the climbing route and my ski descent, as well as the down climb. It does not have the short route from the false summit at the top of the Super Gully across the ridge to the actual summit. I dropped a bunch of my gear off at the false summit and forgot to bring the GPS unit for that portion. We do have photographic proof that we were there. 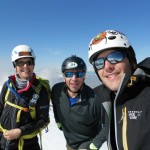 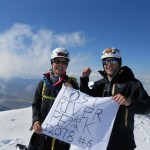 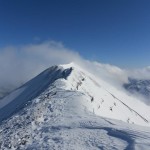 Lost River video TR by Thomas Cox. This video focuses on the ascent, with some footage of the glissade descent.

Comments have been disabled.