Turns All Year (The Unapproved Quest)

We have just topped out on a pass between two beautiful peaks in the Boulder Mountains of Idaho. There is a storm brewing somewhere out there to the northwest, but the only signs of the pending weather system that is approaching is this furious wind, hellbent on knocking us down. The skies are a brilliant azure blue above us, and just a few minutes ago we were in a peaceful white wonderland, looking out at some of the rugged peaks of the Boulder and White Cloud Mountains. But now, this beauty is contrasted by the blast of wind and snow crystals that makes it feel like we are in some sort of a frozen sand storm. 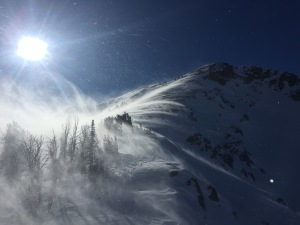 We started out the day looking for some chute skiing in the Galena Summit area, and if possible, trying to find some hidden north facing couloirs that still held powder after the recent freeze thaw cycle that was more reminiscent of early spring, than mid-winter. The target chute that we were headed for had some dangerous cornices that protected the entrance and so we chose a shorter, tamer one right next door. Although we had made good time on our trek, we were approaching that point where we only had time for one or two targets to finish out the day. As we looked up at the summit of Gladiator Peak from the north side, we all had the same thought; If we can’t really get any big long powder filled couloirs today, then bagging a peak seemed like a very good second option.
Now, as we look up the ridge-line, the summit is tantalizingly close, and although it is not a technical climb, we will have to abandon the skis and skins at some point and do some boot packing through breakable crust, rocks, and oh yes, that tormenting wind to get to the top. As we study the wind patterns, we notice that it appears that the wind is actually stronger in this pass and on the exposed ridge then it is at the summit. It’s a “go”. You don’t get this close to a summit that you have never been on and let some wind, crust and rocks stop you.
Our observations proved correct, and although windy, the summit is not that bad. The south face that we intended to ski down has good southern exposure and although the temperatures have stayed very cool, there was still just enough solar heating to produce a decent batch of mid-winter corn. (For those of you who haven’t experienced “corn snow”, think a really nicely groomed ski run, minus the corduroy pattern from the snow-cats and that is what it is like).
As I reflect on another fun, successful day in the mountains, I can’t help but draw some parallels to life in general.
1) It is important to have a plan, but we have to be flexible and adjust that plan as we go.
2) If we really know and trust what the end game is, (the goal we are heading for), then enduring some rough stretches along the way will not deter us. We just bear down and push on, because we know that the summit will reward us for that effort. (And of course if the journey involves skiing, it is just that much better)!