How Not to Ski the South Teton

I’ve flown over it and driven by it so many times I wouldn’t even be able to count them, but until a couple of weeks ago, I had never set foot on Antelope Island in the Great Salt Lake. Although antelope were there when the Mormon pioneers arrived the more famous residents, the bison herd was transplanted during the late 1800’s by William Glassman and John Dooly, (http://static.stateparks.utah.gov/docs/AISPEdPacketHistory.pdf). The Island is a popular recreation and hiking destination, and that was evident on the day that we were there.

The original plan was to drive over, see the visitor center and maybe take a short little hike or two. Well, one thing lead to another and before long we had decided to set off for the high point of the island, Frary Peak. Of course our group was not alone on the trail, and we were about as prepared as most others on the trail that day. As peak climbs go, this really is an easy, straight forward hike. Now the problem is that it is so accessible that if the day that we were there is any indicator, it draws a lot of people who like us aren’t really prepared. There is a trail to the summit from the parking lot, but it is a grinding 13% average grade. As we were climbing up, it became obvious that this would be a game of attrition. Of the dozens of hikers coming down, only a couple had actually reached the summit. As with the other hikers that we encountered, our group of 6 was losing members due to a variety of reasons.

Eventually, 3 of us made it to the saddle just below the summit. At this point, we were 3 miles in, and the summit was only about .4 miles away. The problem is that there were two options:
1) continue on the trail and drop 100 vertical feet below a cliff and boulder lined ridge line and then gain the 100 back plus an additional 100 to the summit. The last 200 vertical is a trail, but very steep.
2) take the cliff and boulder lined ridge for some technical scrambling similar to what one finds on Chicken Out Ridge on Mt. Borah.

I have this twisted little mind that drives me to bag a summit, especially when it is that close. We were getting short on time, (daylight), but Denise and Brook said they’d wait there if I wanted to make a dash for the summit. I took the trail below the ridge to get there and made it in 10 minutes, got the required “splattski” shots and then headed back along the cliffs and boulders to get back to the saddle. That also took me 10 minutes, but the return route was certainly spicier then the approach.

This was a fun little climb, but being in shape is a definite plus. Because it is essentially an “out and back”, it can be a fun hike for people of all skill levels and even those who may lack stamina to get the summit. The views are great, even within the first few hundred yards. My only negative was that we decided to run/jog the trail on the way back and I didn’t really have the right shoes for running – sprained my ankle early and had to take the beating all the way down. 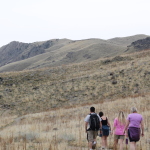 Our group heads towards the summit. 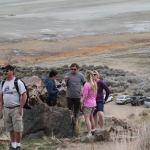 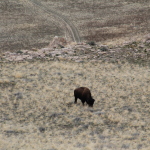 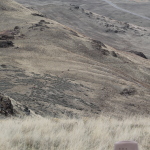 Lots of people on the trail today. 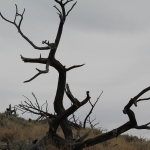 Cool tree near the summit. 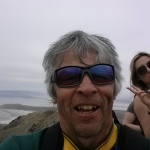 My summit “splattski” gets photo bombed by some random teenager. 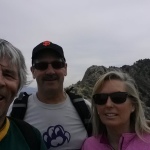 At the saddle (3mi) with the summit ridge behind us. 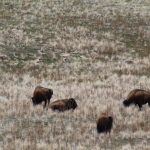 Plenty of bison, but didn’t see any antelope on Antelope Island. 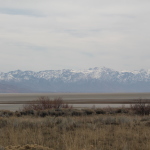 Looking east from the island towards the Wasatch Range. 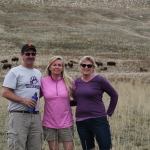 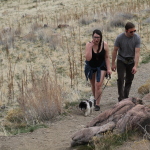 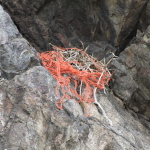