Rolling with the Flow

In one of John Wayne’s last films, “The Cowboys”, he is on a cattle drive with a bunch of kids.  There is a scene where it is zero-dark-thirty on one of the first mornings of the drive.  He comes along with his booming, drawling voice and tells them all to roll their sorry butts out and get going.  He proclaims that they need to get going because they are “Burning Daylight”.  I’m not that good at rising early, (unless there is a peak to be skied), but I do love to burn the daylight out on the trails.  In this post, we burn the daylight on a hike, a fireworks show and a mountain bike ride.
On the 4th of July, Ann and I hiked Corrals with my sister and brother-in-law, Paige and Mike Geslin.  Mr. Wayne would not have approved with our start time, and after finding out there isn’t a lot of shade in the foothills, I think Paige and Mike would have agreed.  There was only some minor complaining about the lack of shade on this hike and as we topped out and had the great views back down to the city, we were all smiles and the 10K hike was a blast. 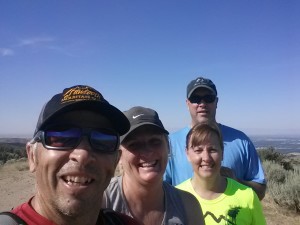 The group selfie on the Corrals highpoint.

Later that evening we headed for the fireworks show.  I call this, “getting back to my redneck roots” at the 4th of July Fireworks. (Yes, I know that fireworks are a great celebration of patriotism – but ya gotta admit that the closer you get to the front row at the show in Ann Morrison Park, the more redneck the crowd is. Not sayin this is a bad thing, just sayin…) 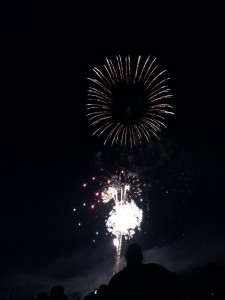 Fast forward to the 9th.  Yes, it’s getting hot in Boise now. The trails in the foothills can be crowded. It is Wednesday and that means that after work is “mow the lawn day”.  These factors might be considered to be deterrents to getting out and enjoying this beautiful area that we refer to as the “Boise Foothills”.

Hiking Corrals is fun, and I do it fairly often with Ann. However, it has a way of pulling back for a nice mountain bike ride. The hike on the 4th was having that effect on me.  On Wednesday evening I hit the trail just before 7:30PM and finished the 19mi ride with 2,600+ vertical gain just before 10:00PM. I had my headlamp with me, but I made it back in the light with minutes to spare.

The temps had cooled off, I hardly saw anyone and the views up on the top of Corrals were simply amazing. The photos below give you an idea of the amazing views that I had – (click to enlarge). I had an almost full moon in the east, and a brilliant Boise sunset to the west.  Now this is what “burning daylight” looks like! 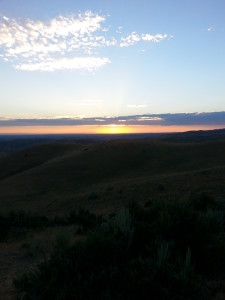 Boise Sunset from the top of Corrals Trail 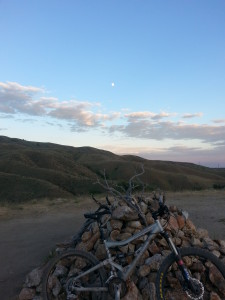 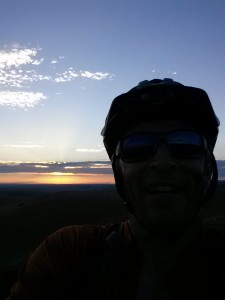 GPS Data and map of the mountain bike ride:

Interested in Mountain Biking videos featuring the Boise Foothills rides? Here is a playlist from the High Adventure YouTube Channel.

Unable to get Youtube feed. Did you supply the correct feed information?