Do Rules Apply When We Leave the Resort

Know Before You Go

I seem to be drawn to interesting adventures that are counter to what the “crowd” or conventional wisdom says I should be doing. I’ve been known to pass up great fly fishing water where “everyone” goes, and instead hike / bushwhack into remote streams with rock and brush lined banks. My favorite mountain bike adventures are on cow trails and hunting trails that rarely see mountain bikes on them. I enjoy skiing the brushy areas at Bogus where most others won’t even enter.

In that vein, I have been drawn for years to the idea of skiing from Bogus down to Boise. However, my route that I was scheming on was different, maybe even unique, because it specifically avoided the “standard” route which is mainly skiing the Ridge Road and its arteries to get back to Boise. My goal was to avoid the roads and get as much “true alpine” experience as possible.

The plan was to ski down the “Central Dry Creek Ridge” into the bottom of what I refer to has the “Dry Creek Basin”. This is the point where several small ravines converge to form the main Dry Creek Canyon. At this point, there is access to a trail system, (comprised of old Forest Service roads). These trails criss-cross the area and eventually tie back into Bogus Basin Road. They are popular with snowshoe, X-C, and hiking crowds. The plan was to hit this system climbing generally to the west and then drop back down into Dry Creek after the canyon starts to widen out again. From that point, we follow established mountain biking trails back to town: Dry Creek, Dry Creek/Hard Guy Connector, Hard Guy, Corrals, Highlands.

The weather in Boise, especially over the last several years offered few, if any opportunities to do this route. But this winter, (2016-2017), is proving to be an exception. We have good early season depth up high, cold valley temps and not a lot of solar heating on southern aspects. Combine that with record snow levels in the valley, and it is “game on”! 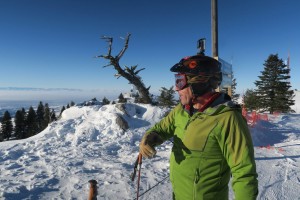 All was set for the attempt. I recruited a willing partner, Jack Marr and we headed out from the top of the Deer Point lift on mid-morning on New Year’s Eve. As soon as we got to the central ridge, we hit some breakable wind crust to almost corn snow on the east aspect. About half way down I moved over to the west aspect and from there we had nice, soft, wind-buffed powder down into the main ravine. 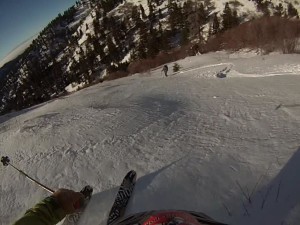 This was the first transition to skins. 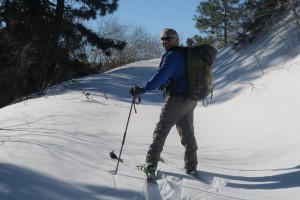 The skin out was easy and most of the way we were on the established snowshoe trail. As we topped the next ridge, we transitioned again to alpine mode and followed an old trail down the ridge until it turned back up the canyon. 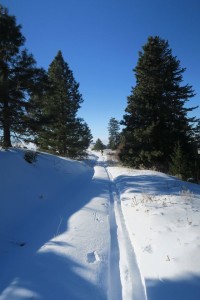 We were on south facing slopes down into the canyon and there was only very thin snow-pack, sometimes none. 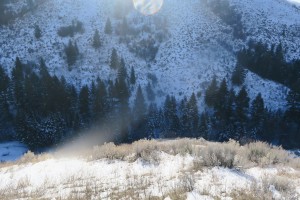 Jack opted to down-climb this section, but I kept the skis on and carefully picked my way down. 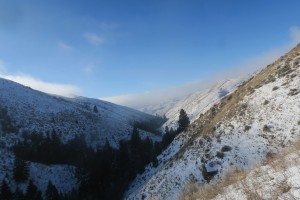 As soon as we dropped into the canyon, it was like going into a deep freeze. The snow on the bike trail was sufficiently deep to make skiing easy, and within a few hundred yards, we hit snowshoe/hiking tracks, which only made the going even better. 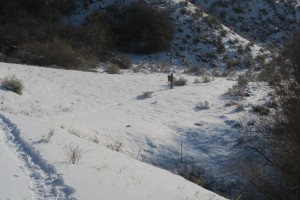 We cruised on out to the Dry Creek / Hard Guy Connector and at that point we had decided to split up. 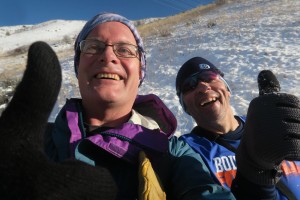 The skiing and down-climbing had taken a toll on Jack, and we were pushing the time constraints. We were now both on well traveled sections of the trail and low risk for injury, so we made the decision for him to bail at that point. I was still hoping to get back to Camel’s Back Park, but as I progressed, I too ran out of time – and energy. I decided to cut it short at the Corrals trail head. For those of you keeping track, this is .71 miles from the city limits. 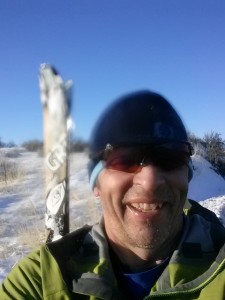 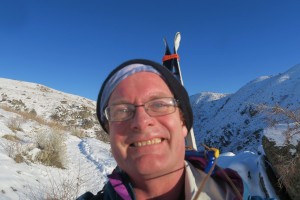 Video TR of the Route:

GPS Map of the Route, (downloadable):

Overall, this was a fun adventure. I think both Jack and I enjoyed this little trek. Here are my observations: