As a wrestler in high school and college, it was always an interesting dynamic to see who paired off with each other in practices. What I noticed in high school was that there were certain guys who would pick their buddy, or someone who wasn’t as much of a challenge. As a result, those guys never reached their full potential. When I got to college, I noticed two things that were very different from high school. First off, there wasn’t anyone on the team that you could “coast” against. Secondly, most of the guys would try to go up against the meanest toughest wrestler on the team.
My recent attempt on Mount Moran refreshed my consciousness on how important this principle is. If we want to be the best, we have to challenge ourselves. I had been approaching my uphill training entirely wrong. Instead of picking out the most difficult route up the mountain, I would look at the terrain and figure out the easiest, quickest way up. The problem with this is that there are no easy routes up these big peaks that I’m attempting to climb!
Today was a great day to start to challenge myself. Outfitted with my new Dynafit setup, I skied down to the bottom of Chair 3 at Bogus and picked out a steep challenging ridgeline to get to the top of Mores Mountain. The pictures below show what the terrain looked like.
Once I got to the top, I skied down over the East (back) side of Mores on a good steep ridge line and then turned around and climbed right back up the ski route, (instead of following the easy trail back around to the OB gate). Oh by the way, the snow was terrible today – warm, sticky and heavy. This made it even tougher to climb and ski in.
Objectives accomplished:
1,800 feet of climbing in 1:50 hrs, which was just right at the target of 1,000 feet/hour. This included a short but technical rock climb to finish the first leg where I had to take the skis off and then put them back on.
My new “true” AT setup allowed me to execute uphill turns much more efficiently and the custom fit skins performed flawlessly.
It is only a start, but even an “old guy” can change and that is what I intend to do. No more “easy way out” when I’m working on mastering a challenging skill. Rather look for the big challenges and apply proper technique and conditioning. Don’t pick on the 98 lb. third stringer, but look for the 145 lb., 3-time state champ. That is my new motto.

Here are some pics of the climbing terrain, (click twice to view full size): 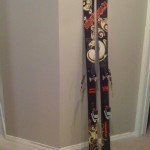 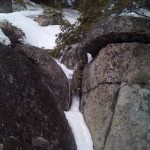 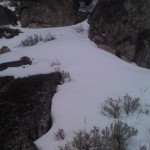 I kept the skins/skis on right up to the base in the upper left. 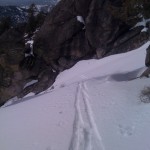 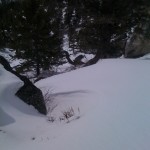 A view back down the climb. Skin track can be seen in the trees. 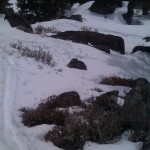 Looking back at the last steep climb to the rock base.

GPS Data: (Includes a couple of test runs on chair 3 for the new skis. Crud, moguls, slush, ice. The Dynafit’s were STELLAR!!!)